For so many years God had been promising a son to Abraham and Sarah. God had even promised that from that son would come descendants as numerous as the stars in the sky. Even more, one of those descendants would be the one through whom God would bless every family on earth.

For 25 years, as Abraham got older and older, God held back the fulfillment of that promise as He trained Abraham in faith. Then when Abraham had a son through Hagar, Sarah’s handmaid, God told Abraham to send Ishmael away – he was not the long-awaited son.

Finally, God blessed Abraham and Sarah with a son, Isaac. Abraham was 100 years old at that time.

Then came that terrible night when God tested Abraham.

This account begins with the phrase “some time later” which would indicate that Isaac had grown from a child to an older boy or even a young man. He was now old enough and strong enough to carry the wood for a burnt offering. Then came the test. 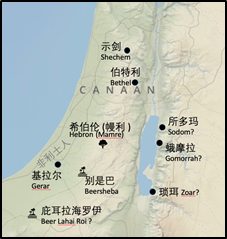 It had been about 50 years since Abraham had left his relatives back in Haran. What was happening back there? Abraham received the new of the birth of many nephews and nieces. Eight nephews were born to Abraham’s brother Nahor.

The significance of this section is the name that occurs in verse 23. Rebekah, the daughter of one of Abraham’s nephews, would become the wife of Isaac one day. This section was written to explain her background. God had planned for her to play an important role in the history of God’s people.