In chapter 20 the focus of the account returns to Abraham and Sarah. When the events described in this chapter took place, Sarah may have already been pregnant, because the Lord had told them in Mamre, “I will surely return to you about this time next year, and Sarah your wife will have a son” (Genesis 18:10).

Abraham and his family had lived near Mamre for about 20 years. But now something led them to relocate. Perhaps there was a famine. Perhaps there was simply a need to move to new pastureland. Whatever the case may have been, Abraham eventually came to live near Gerar in the land of the Philistines. 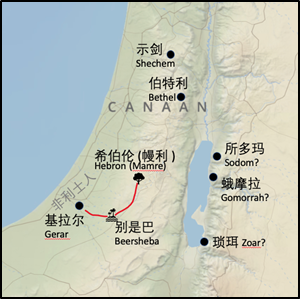 This is the second time that something like this happened. The first time Abraham lied about his wife was in Genesis 12:10-20, when Abram and Sarai agreed to lie to the Egyptians. Now the same sin is repeated again.

In 20:12 Abraham explains that Sarah was actually his half-sister, the daughter of his father, Terah, by another wife. Was marrying your half-sister allowed? Look at these verses:

Let’s remember that the commandments God gave to Moses were hundreds of years after the time of Abraham. As the human race began to re-populate the world after the flood, marrying those who were related to you was often necessary and not as awful as it came to be later. We do not know for sure whether Terah was married before or after he was married to Abraham’s mother.

Let’s analyze the lie/half-truth that Abraham and Sarah engaged in. Was it a lie or not? Is telling a half-truth a lie? Is telling only part of the truth the same as lying? And if they were lying, why weren’t they punished for it?

The Scripture contains several incidents when people told lies and were not punished for it, but even commended for it.

The Hebrew midwives Shiphrah and Puah lied about (Exodus 1:15-21) the birth of the baby boys and God blessed them for it. Rahab lied about the spies that she hid in her house (Joshua 2:4-7) and the New Testament even commends her for what she did. (“In the same way, was not even Rahab the prostitute considered righteous for what she did when she gave lodging to the spies and sent them off in a different direction?” – James 2:25)

But the Bible clearly condemns lying as a sin. “Do not lie. Do not deceive one another” (Leviticus 19:11). “The LORD detests lying lips, but he delights in men who are truthful” (Proverbs 12:22). “Do not lie to each other, since you have taken off your old self with its practices” (Colossians 3:9). And Ananias and Sapphira were struck dead when they told a lie (Acts 5).

Once again the events of this chapter reinforce God’s grace and faithfulness. In spite of Abraham’s failure to act in faith, God blessed him and turned what could have been a disaster into a way to bring even more blessings to Abraham and Sarah. It was as Abraham’s servant later declared: “Praise be to the LORD, the God of my master Abraham, who has not abandoned his kindness and faithfulness to my master.” (Genesis 24:27)

In our next lesson we will see how God kept one of his most important and seemingly impossible promises to give Abraham and Sarah a son in their old age.